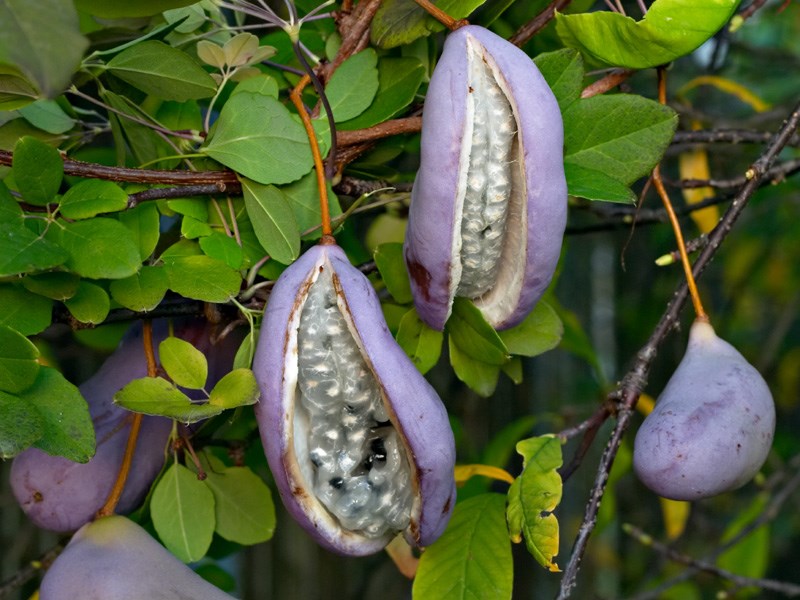 Akebia quinata
Description
Apebia quinata (Apebia quinata) is a plant of the family Lardizabalaceae.
It is a semi-evergreen vine native to the temperate forests of East Asia: Japan (Honshū), Korea, China (to Hubei). Its fragrant flowers bloom from April to May.
Mainly distributed as a decorative plant, akebia is also an edible fruit / vegetable poorly known in the West, underutilized and promising: domestication trials are underway in northern Asia.
The fruits of different colors according to the varieties (from white to purple-blue) mature between September and October. The sweet and gelatinous pulp accounts for 17% to 40% of the weight of fruit, it surrounds the bitter seeds if they are crunched. The bitter mesocarp is eaten cooked.
​
History and domestication
Akébia has always been a fruit of gathering (including for Japanese monkeys in winter) for its pulp and its medicinal uses, especially in Chinese medicine: diuretic, improved blood circulation, detoxification and anti-cancer.
Domestication as a cultivated fruit began in China in the 1950s with the collection of wild varieties. In northern Japan it dates from the early twenty-first century. The Chinese are moving rapidly towards the marketing of cultured fruits.
The objective of the selection is a bigger fruit1, sold for its pulp and a seductive blue color. The fruits of culture are harvested a week before the spontaneous opening1, the improvement aims an abundant pulp, seeds not very sensitive under the tooth where moles as well as a mastery of the problems of interbreeding.
Male (small) and female flowers

The antioxidant activity is poorly known, a Korean study shows in akébia vinegar.

Usage and recipes
Pulp
The sweet gelatinous part that surrounds the seeds is eaten raw when the fruit opens, its taste is not very marked. It is allowed to melt in the mouth without chewing the seeds5. The pulp separated from the seeds in a colander is used to make ice creams and sorbets, liqueurs6.
The envelope
The bitter mesocarp is eaten cooked mainly sautéed or fried in tenpura: cooked it preserves a crunchy texture and a slight bitterness.
Shoots: Young shoots are eaten cooked in brèdes8.
Traditional Medicine: The aqébia quinata stem - mutong in Chinese - contains an akeboside, akebine. Chinese medicine uses decoction as analgesic, anti-fungal, anti-inflammatory, diuretic, emmenagogue, febrifuge, laxative, galactogen, stimulant, stomachic and vulnerary.
Current Chinese research lists the components of akebia quinanta and their anti-tumor action. Saponins: Like margarine or aubergine, the presence of saponins in the mesocarp and in the seeds causes an anti-inflammatory action, an inhibition of the sensitivity to the pain is also demonstrated in the rat. The inventory of triterpenes-glucosides is in progress.