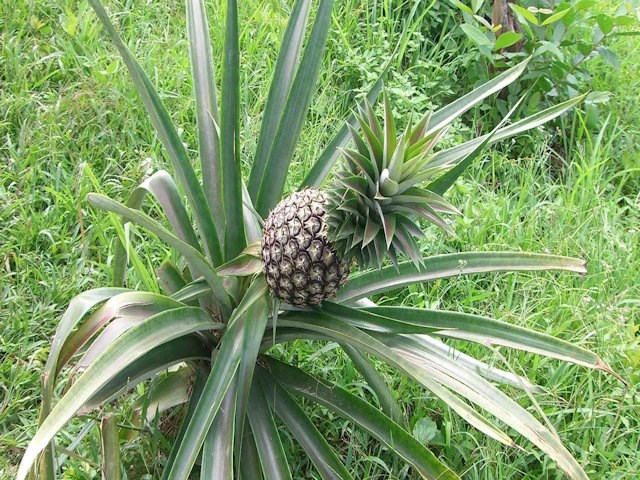 Pineapple comosus
Kingdom: Plantae
Family: Bromeliaceae
Binomial name: Ananas comosus (L.) Merr., 1917
Pineapple (Pineapple comosus) is a xerophytic plant, native to South America, specifically Paraguay, northeastern Argentina and southern Brazil. It is known primarily for its edible fruit, which is actually a compound fruit. The word pineapple comes from tupi-guarani naná naná, which means "scent of perfumes". The term pineapple is also an ambiguous vernacular name which may refer to several other species of Bromeliaceae, not inedible like the species Glomeropitcairnia penduliflora designated by the terms "wild pineapple", "pineapple wood" and "zananas mawon", or several species of the botanical genus Pineapple as pineapple bracteatus under the names "wild pineapple" and "brown pineapple".
Description:
Pineapple comosus belongs to the family bromeliads, and the genus Pineapple. It is a terrestrial species of herb up to 1 m to 1.50 m in all directions, with a rosette of long leaves lanceolate 50 cm to 1.80 m, toothed in general, and sometimes smooth.
Pineapple flowering is characteristic of Bromeliads, with a single crown of short leaves at the end of a stem, surmounting a set of ephemeral blue flowers (living for only one day) without a peduncle, giving numerous conical berries. and sterile, which individually grow to meet, forming at maturity the pineapple that we know. Pineapple is therefore a compound fruit, also called infructescence. The set is elongated and may be more than thirty centimeters in length; its bark, composed of hexagonal scales, varies in color according to the variety. Its flesh, very juicy, is also of variable color, usually white or yellow.
Comosus pineapple is a CAM plant, it is the only species of the genus Pineapple to be self-sterile. The seeds are therefore rare and two different varieties must coexist. This monocarpic plant is therefore reproduced mainly by rejects (bulblets), which it gives in large numbers.
The weight of the fruit is proportional to the weight of the foot at the time of flowering: the art of the planter is therefore to make it "bloom" at the right time.
Culture :
Pineapple is a tropical plant. Sensitive to frost, it requires well-drained, rich and acidic soil. A pH of about 4.5 to 5.5 is important for good growth: soil-borne diseases are thus reduced. Pineapple does not like stagnant water at all, hence the importance of drainage.
Pineapple tolerates low soil fertility, but better production is obtained on fertile soil rich in organic matter and potassium. High levels of aluminum and soluble manganese in the soil are tolerated.
A pineapple requires fourteen to twenty months from planting to harvesting: six to eight months for the vegetative phase, and five to six months from forcing to harvest. The same plant generally fructifies two or even three times: a first time after twenty months, and a second time fifteen months later.
When a small fruit is desired for the fresh fruit market, the crop may be forced earlier than when a large fruit is required, such as for canning. The larger the plant when forcing, the bigger the size of the fruit.
Multiplication:
In nature, pineapple is pollinated by hummingbirds. Small brown seeds are formed in the fruit. To avoid the presence of these seeds affecting the taste of the fruit, growers move the hummingbirds away from the plantations. These birds are also prohibited from import into producing areas that are not a natural habitat for these birds, such as the Hawaiian Islands.
The pineapple is multiplied more often by division of the rejects formed at the base of the plant, or by cuttings of the crown of leaves carried by the fruit. It is said that the plant has a vegetative multiplication.
Use :
For alimentation
Pineapple juice has proteolytic properties (endopeptidase, hydrolase, cysteine). It contains several peptidases from the papain family, including ananain, and bromelain, as well as others such as phytepsin8. It can therefore be used to tenderize meat. For the same reason, its juice is not recommended in desserts with gelatin, which it liquefies.
The physicochemical properties of this fruit strongly resemble those of citrus fruits, and cooks use it in the same way, as an accompaniment to meat, fish or dessert.
In Congo, we make it a local beer.
In Burundi, we also make pineapple liqueur, called Bourasine.
For the textile
The fibers of the pineapple leaves make it possible to manufacture piña, used in particular for the barong tagalog, a traditional Filipino clothing.
For health
Pineapple is very rich when eaten fresh:
In all parts of the pineapple is found an enzyme, bromelain, which belongs to the family of proteases; it would have healing, anti-inflammatory, anti-cancerous effects and facilitate the resorption of edema.