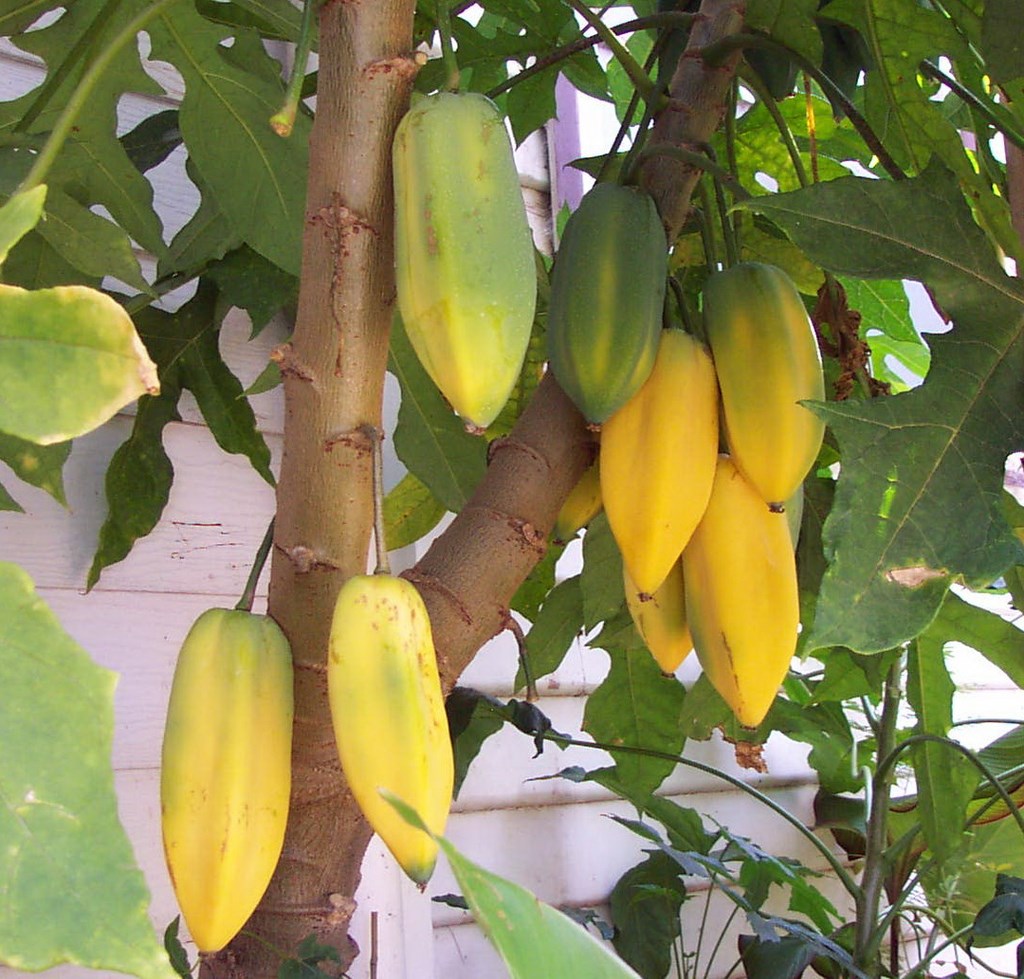 Babaco. Carica pentagona Heilborn.
Carica pentagona Heilborn, Babaco, belongs to the family Caricaceae and the genus Carica which includes about 20 species and many cultivars.
Origin, distribution:
Carica pentagona Heilborn native to the province of Loja in Ecuador is a natural hybrid that is grown in its native country in mountains between 1500 and 2000 m altitude.
The babaco was identified in the 1920s, it is probably a natural hybrid from the cross of Carica stipulata Badillo and Carica pubescens (A.D.C.) Kuntze. The commercial culture of babaco began in Ecuador a few years later. Subsequently Carica pentagona Heilborn was introduced in New Zealand, Europe and California in the United States.
Description:
The babaco is a fast-growing, semi-woody shrub growing to about 3 m tall.
The alternate, petiolate leaves develop along the trunk. The broad, thick petiole is about 50 cm long. The blade is lobed with five to seven lobes and has very visible veins of light green to dark green.
The babaco is a species that only has female flowers. The flowers, bell-shaped, are born in the axils of the leaves. They measure 3.5 to 4 cm. They have five yellowish petals and dark green sepals.
The fruits (berries) 30 cm long and 15 cm wide, develop in the axils of the leaves probably without pollination. The pentagonal section of the fruit is at the origin of the Latin name of the epithet of the pentagona plant. The five longitudinal edges meet in a point at its lower end. At the petiole, the base is round and concave. Like the papaya, the babaco's green fruit exudes a latex that contains proteolytic enzymes. On the same tree, fruits do not ripen simultaneously but according to a vertical gradient from bottom to top. The fruit does not have seeds. She also does not appear to have an ovarian cavity. The pulp, edible at maturity, is localized to a thickness of 1 or 2 cm under the epicarp. Ivory color, it is very watery, sweetish and very fragrant. Its particular aroma is similar to a mixture of pineapple, lemon, papaya and strawberry.
In its original habitat, a babaco plant produces 60 to 80 fruits annually. The first fruits are usually harvested 12 to 16 months after planting.
Traditionally, babaco is eaten fresh when the fruit is fully ripe. In this case, the skin is also edible. Thanks to its characteristic aroma, it is also frequently used to flavor ice cream and yogurts.
Multiplication:
Since the plants are exclusively female, the seedless fruits of the babaco develop parthenocarpically. The fruit grows as if the flower had been fertilized, but the fruits thus produced do not contain seeds or the seeds do not contain embryos. The spread of the babaco is therefore only vegetative. Carica pentagona Heilborn is propagated by cuttings. Grafting is another propagation technique mainly used in Ecuador.