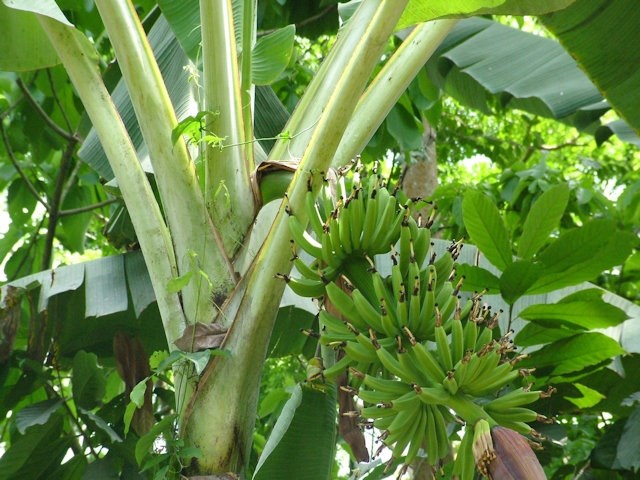 Banana
Native to India, banana has been introduced since very remote times in all tropical regions.

Description of the banana tree.
Banana is a perennial monocotyledonous plant.
The banana trees have an underground stem (rhizome), they are provided with a false trunk which can stand up to 7 m, formed by the big sheaths of the leaf petioles rolled up on each other. The huge stem of banana is therefore herbaceous, it is she who supports the fruit diets.
Every year when the main stem has been undermined at its base, new subjects are born again, which in turn will produce a new crop the following year.
The false trunk, of a yellowish green speckled with bistre and rose, rises from a bulbous root, and at its apex, long, broad, satin-green leaves widen into a parasol after having unfolded from the trunk. They then lower themselves at their extremities, forming an immense arbor providing shade on the damp ground where the banana tree takes pleasure.
Leaves long and broad, have a fragile limb, which tears very easily.
Flowers, yellowish, contained in large bracts (leaves) purplish, form inflorescences in clusters.
The fruits, bananas, are elongated berries, with thick and soft bark, arranged in superimposed crowns commonly called "hands" around a big stem, thus realizing the classic "regime"; they contain a whitish or yellowish pulp, pasty, sweet and pleasantly scented, rich in starch, sugars and vitamins, A, B, C, E, they contain many trace elements, phosphorus, magnesium, potassium, iron, zinc ...
After fructification, the aerial part of the plant dies while the rhizome remains, from which new false trunks will emerge.
In Reunion the banana flower is called Baba fig, it is used to make a curry with meat. bananas are commonly called figs.
The banana is harvested green because it is the cut that triggers the ripening of the fruit. The fruits left on the banana will increase in volume until bursting without gorging of sugar.

The banana :
The banana, says it, accompanies the man during all his life. Fruits, of course, constitute a staple diet that is constantly being replenished. In some countries, its large leaves welcome babies as cradles. From these same leaves, the natives make vases, basins to store liquids and food. They are also used to cover the huts and even sometimes to get dressed.