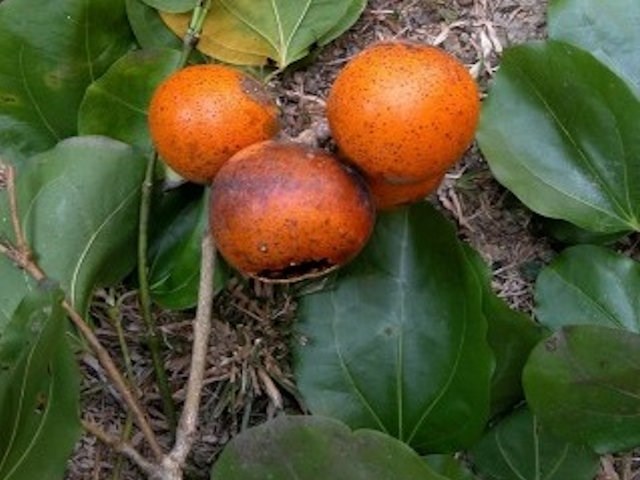 Bombax costatum Pellegr. & Vuillet
Not. Syst. 3: 88 (1914)
Synonyms: Bombax andrieui Pellegr. & Vuillet. Bombax buonopozense auct. no Pal. Beauv. Bombax houardii Pellegr. & Vuillet. Bombax vuilleti Pellegr.
Common Name: Forest Kapokier
Local names: Ewondo: essodoum, nso douma- Pigmy Bibaya: dombi, ndombi
Origin, geographical distribution and ecology
Species of tropical Africa, in the Guinean domain, from Senegal to Cameroon and to the Central African Republic. It is present in totally or partially secondary rainforests, gallery forests and coastal scrub.
Description:
Tree up to 30 m tall and 60 cm in diameter; tiered crown, branches more or less spread, young twigs sometimes thorny; straight bole; bark cracked, with conical spines, brown, slice pink or red striped with white.
Leaves alternate, compound fingered; 5-8 leaflets; closely obovate laminae, up to 16 x 6 cm, clearly acuminate and mucronate.
Solitary flowers on leafless, orange or red branches; hermaphrodites, pentamers; fleshy receptacle; 5 sepals fused, fleshy, internally pubescent with silky white hairs; 5 contorted petals, pubescent on both sides, obovate oblong, up to 6 cm long, fused at the base of the staminal tube; stamens very numerous (100 to 200), partly welded and forming a tube 8 mm long in two whorls, transversely flattened free net; ovary with 5 ribs ending in 5 stigmas.
Fruits: oblong to subglobose capsules up to 16 x 6 cm in size, with 5 apical dehiscence valves; silky white kapok very abundant.
Seeds globose or pyriform, dark brown or black, up to 5 mm in diameter, with a strong circular black scar.
Variability and conservation of the resource:
The species is often slaughtered during the clearing of crops, the expansion of plantations in the forest area leads to a significant reduction in natural populations. As a result, the harvesting that has hitherto been carried out on spontaneously growing populations concerns a smaller and smaller number of individuals.
Agronomy:
The species grows well on gravillion soils and supports lateritic soils. It is found in Burkina Faso under rainfall ranging from 600 to 900 mm.
Flowering takes place between October and January. Before sowing, the seeds should be scalded and then soaked in water for 24 hours.
Observations on isolated individuals suggest that the species may have a high rate of autogamy or that this breeding regime is favored under isolation conditions.
There are approximately 17,000 seeds per kg of seed; because of their low weight, they can be transported by wind or water and ensure a large flow of genes.
According to Ouedraogo (2002), the ability to reproduce by strain of B. costatum suggests possibilities of cuttings or layering.
The flowers and in particular their capsules which are used to prepare sauces being the most exploited parts of the tree, the fructification becomes rare. This limits natural regeneration, causes a shortage of seeds for the production of nursery plants and is one of the major constraints to the cultivation of this species.
uses:
Bombax costatum is a multipurpose plant. The roots, bark, leaves, twigs, sap, flowers and fibers are the most used parts of the plant and are well suited for various uses in the dry and humid areas of Africa.
Bombax costatum is a honey plant whose flowers attract bees and birds. The flowers and green fruits (dry) are used as a condiment to bind and glue the sauces. Dried fruit is also a culinary ingredient.
All parts of the plant have medicinal properties. The bark is emollient, galactagogue and diuretic. It promotes childbirth and relieves diarrhea, bruising and gonorrhea. The twigs tend the hemorrhoids while the leaves facilitate the expulsion of the placenta (Arbonnier, 2000). The bark offers a red dye whose use and utility are not well known.
Wood is used as a building material. It is used in carpentry and crafts for the manufacture of canoes, drums, containers, seats and carved objects. Fiber is used to pad mattresses, cushions, saddles and so on. (Nouvellet, 1987).