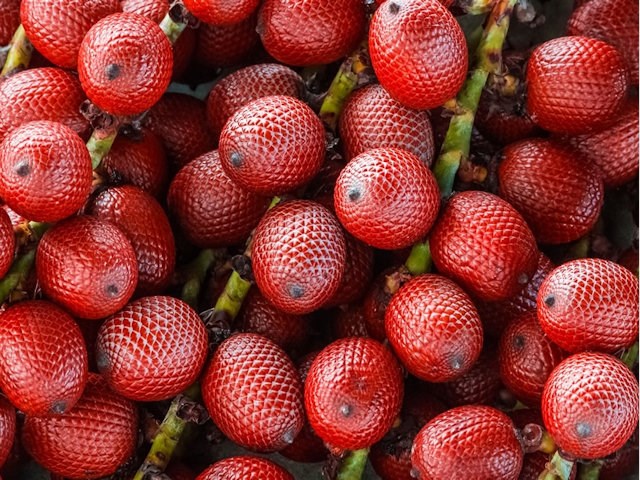 Mauritia flexuosa
Known as the moriche palm, ite palm, ita, buriti, muriti, canangucho (Colombia) or aguaje (Peru), is a palm tree. It grows in and near swamps and other wetlands of tropical South America. It has been reported in Trinidad, Colombia, Venezuela, Guyana, Suriname, French Guiana, Brazil, Ecuador, Peru and Bolivia.
M. flexuosa, a tree, can grow up to 35 m tall. The large leaves form a rounded crown. The flowers are yellowish and appear from December to April. The fruit, which grows from December to June, is brown in color and covered with shiny scales. The yellow flesh covers a hard and oval nut. The seeds float and this is the means by which the palm spreads. In natural populations, the tree reaches very high densities.
Fruits.
The Moriche palm is edible and used to make juice, jam, ice cream, fermented "wine", desserts and snacks, requiring a harvest of more than 50 tonnes per day in Peru.
Inflorescence buds are consumed as a vegetable and the sap can be eaten fresh or fermented (see palm wine). Yarns and ropes are produced locally from the tree fibers.
Humans consume weevils that bury themselves in the trunk of the tree.
Oil
Buriti oil is an orange-reddish oil extracted from the fruit of the moriche palm tree. The oil contains high concentrations of oleic acid, tocopherols and carotenoids, in particular beta-carotene. The oil has a reddish color used as ink on hides and skins.
Ecology
This tree is important for many animal species; Several species of birds, such as the Red - bellied Macaw, Gray Midge, and Mori Oriole, use it for nesting and foraging. Tapirs, peccaries, fish and monkeys depend on the fruit.
Alexander von Humboldt documented the tree and the ecosystem he supported in 1800 when he crossed the Llanos region of Venezuela. He "watched with astonishment how many things are connected with the existence of a single plant". He called it "the tree of life" and essentially described it as a key species, although the concept was only explicitly defined in 1969 by Robert T. Paine