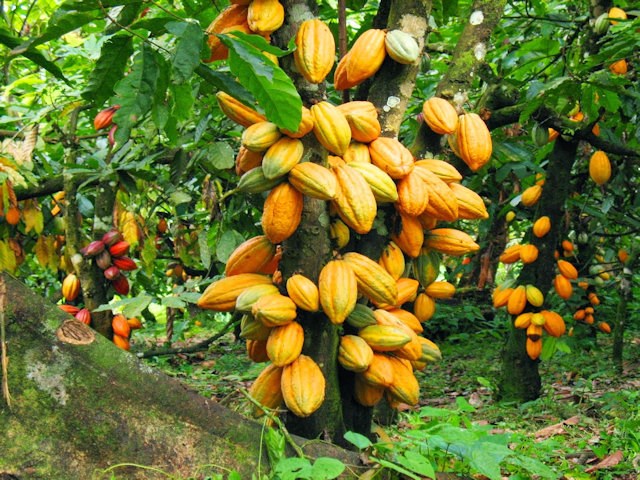 Also called cocoa or cocoa tree, the cocoa tree (Theobroma cacao) is a small evergreen tree of the genus Theobroma of the family Sterculiaceae, according to the classical classification, or Malvaceae, according to the phylogenetic classification. It produces edible beans with different flavors depending on the varieties of cacao, from which cocoa, the basic product of chocolate, is made.
The cocoa tree is a tropical species native to Mexico domesticated about 3,000 years ago, most likely at the beginning for the making of a fermented drink, therefore alcoholic1. It grows naturally in the Orinoco Basin and the Amazon at low altitude, at the foot of the Andean Cordillera on low-lying hills (between 200 and 400 m), in the rainforests in the shade of the canopy formed by higher vegetation.

It is a tree that is 10 to 15 meters high, usually cut to 6 or 8 meters, cauliflora and evergreen. It flowers from 3 years and gives flowers, fruits and leaves throughout the year. It reaches its full yield 6 to 7 years after planting and lives up to 40 years. Its flowers measure about one centimeter and only one of about 500 of them gives fruit. The tree can produce up to 100,000 white or slightly pink flowers annually. They appear all year round on the bulges of the wood of the tree, called floral cushions. As a result, there are flowers and fruits on the tree at the same time.
Its fruits, the "pods", are large elongated berries resembling a small football. Each pod can weigh up to 400 g for 15 to 20 cm long. They have the particularity to grow at the same time on the main branches but also directly on the trunk of the tree. Their characteristics are very variable from one population to another but also within the same population. The immature pods of the Forastero are usually green or pale green and then turn yellow when ripe. For Trinitario and Criollo, immature pods have different intensities of red and, when mature, orange. Depending on the genotypes, fruit ripening lasts 5 to 7 months. On average one tree gives about 150 pods a year, which gives about 6 kg of cocoa.
The pods contain many seeds (between 25 and 75) grouped in ears and called cocoa beans rich in starch, fat and alkaloids. Each mature seed is surrounded by a pulp called "mucilage". It is white, watery and sweet and constitutes a protuberance of the testa, which conditions the fermentation necessary for the production of market cocoa. After fermentation and roasting, these seeds are used for the production of cocoa and chocolate.
The flowers, reddish white, are small and clustered in terminal clusters 20 to 50 cm long. They have five petals 5 to 10 mm long, five sepals and five stamens. The superior ovary contains only one egg. In the middle of the spring, after the end of flowering, it takes three to four months for the fruits to mature.
The fleshy fruit is an oblong-shaped drupe attached to a long peduncle, variable in size depending on the variety, from 20 to 45 cm long and 7 to 12 cm in diameter, weighing from 500 g to 2.5 kg. The skin is smooth and thin, fairly resistant, is ripe green, yellow or scarlet (depending on the varieties) more or less spotted with green and red, purple or pink (on the side exposed to the sun). The rather large and flattened nucleus contains a single large seed (4-7 cm long and 3-4 cm wide and 1 cm thick) adhering to the flesh. It is covered with fibers more or less developed in the flesh according to the varieties. Its shape can be round, oval or kidney shaped. Its flesh is more or less unctuous, juicy, sweet and fragrant depending on the variety, and is often sweet like that of peach, hence its nickname "tropical peach".
​Bioaccumulation: The cocoa tree seems to have a tendency to capture certain trace elements such as lead or cadmium by bioaccumulation or adsorption, especially in the fruit and cocoa during the production process (and leaded tetraethyl lead is still in 2014 used in many poor countries, including Africa). Among the products of the typical Western diet, chocolate has one of the highest concentrations of lead, and can potentially cause slight lead poisoning in people who consume a lot of lead. Recent studies have shown that, although the grains themselves contain little lead, this metal tends to bind directly to cocoa during the manufacturing process and contamination can occur at all stages of this process. The scales from the hull recovered after cocoa production have also been successfully tested to remove effluents or lead contaminated soil, including acidic solutions that can be regenerated.