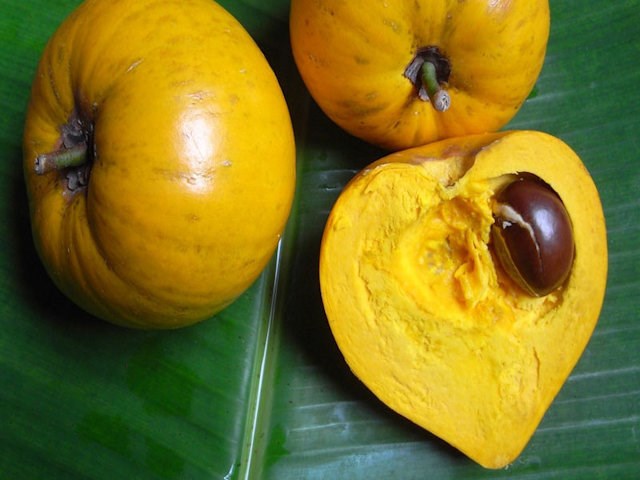 Canistel- Pouteria campechiana
is an evergreen tree native to southern Mexico and Central America1. It is grown for its edible fruits in other tropical countries. Its binomial name is derived from the Mexican city of Campeche, where it grows. The tree reaches 10 m. It produces yellow-orange fruits, 5-7 cm long, and edible. Their yellow flesh is sweet, with a texture often compared to that of a cooked egg yolk, hence the name egg-fruit.
Pouteria campechiana, the canistel usually has a spreading cyme, borne by a brown trunk. It rarely exceeds a height of ten meters, all its organs contain a white latex.
The evergreen leaves are generally grouped at the end of the branches, borne by petioles of 1 to 3 cm, they are alternate, lanceolate-oblong, with wavy margin, and marked by whitish veins.
The bell-shaped greenish flowers are either solitary or in small clusters, borne by slender peduncles arising at the axils of the leaves. They are bisexual and fragrant.
The fruit, perhaps of very variable shape, almost round or a little oval, ovoid or spindle-shaped. It is often swollen on one side. The fruit is harvested when its skin turns yellow, so it is very smooth and shiny. The different fruit shape comes from cultivars cultivated, in the past some types so different from the species have been recorded, but apparently the cultivars are not named.
The fruit contains 1 to 4 hard seeds, brown, oval or oblong-oval, both ends pointed. The yellow flesh is relatively firm and floury with fine fibers. It is often compared to the yellow texture of a hard-boiled egg. The flavor is sweet, musky more or less.
The fruit that contains many minerals and vitamins is eaten naturally, it can be used for making jam.
The wood of Pouteria campechiana is sometimes used in construction.