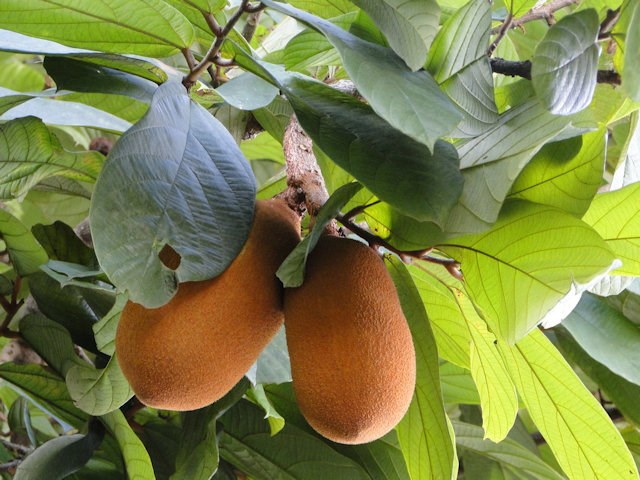 Theobroma grandiflorum (cupuassou) is a dicotyledonous plant species of the family Sterculiaceae (or Malvaceae according to phylogenetic classification), native to the Amazon. It is a tree close to the cocoa tree. It is native to the south and south-east of the Brazilian Amazon, especially parts of Pará and Maranhao. Largely cultivated in northern Brazil, the main production areas are Pará, followed by the state of Amazonas, Rondônia and Acre. This plant is also appreciated in French Guiana where it was introduced by the Brazilian community.
Description
The cupuaçu's foot is a small tree generally 5 to 15 meters high, with individuals that can exceed 20 m. The bark is brown. The leaves are 25-35 cm long and 6-10 cm wide, with 9 to 10 pairs of marked veins. The young leaves are pink-purplish and green when growing. Dark red flowers are the largest of their kind. They appear on the trunk (it is a case of cauliflorie) as well as on the branches. The fruit of the cupuaçu is a round to oblong pod, covered with a brown down. It can reach 20 cm long and 10 cm in diameter, and weigh 1 to 2 kg, making it the biggest fruit of the family.
The solid pericarp forms a shell 4 to 7 mm thick. It contains about fifty beans surrounded by a mucilaginous, acidic and aromatic white pulp. The fruits appear from January to May and are the largest of the family.
uses
Cupuaçu liquor produced in Guyana. The white pulp of the cupuaçu is frequently used for making desserts, juices, ice creams, sweets, jams, jellies, liqueurs, etc. Highly flavored and tart, it exhales a unique scent, it contains glycosides of sulfated flavones theograndin I and II, and other flavonoids, including catechins, quercetin, kaempferol and scutellarin. It also contains theacrine (1,3,7,9-tetramethyluric acid) instead of the xanthines (caffeine, theobromine, and theophylline) found in cocoa.
A cupuaçu-based Bolivian drink is exported to some European countriesThe cupuaçu beans are used in certain regions of Brazil (Solimões, Madeira, and Tocantins valleys of Amazonia) for the making of a variety of chocolate, locally called cupulate. The same method is used as for his cousin the cocoa tree. The cupuaçu butter has a strong enor in linoleic acid which lowers its melting point.
Cupuaçu butter and its pulp are used in cosmetics4 and traditional medicine5. The antioxidant properties of cupuaçu have made it an ingredient for some cosmetic products. Some scientific studies have shown medicinal properties to treat diseases of the gastrointestinal tract.
Wood can also be used as a building material.
Intellectual property controversies In the early 2000s, cupuaçu was at the center of an international debate on biopiracy. The Japanese company Asahi Foods has filed the name "cupuaçu" for exclusive use. Brazilian NGOs and the Brazilian government (Chamber of Deputies and Senate) have made joint efforts against this company, and have managed to cancel this registration by the European Union, Japan and the United States.
Culturing
The cupuaçu appreciates a fine soil forming a fertile, deep soil with good water retention and a good physical constitution with a pH between 6.0 and 6.5. It is possible to multiply the cupuaçu from cuttings or seeds. A 5-year-old tree produces an average of 20 to 30 fruits a year. A mature tree produces 60 to 70. The butterfly caterpillar Macrosoma tipulata (Hedylidae) can be a serious havoc on the foliage of cupuaçu.
​Synonyms According to Catalog of Life (November 21, 2016) 8: Bubroma grandiflorum Willd. ex Spreng. Deltonea lactea Peckolt Guazuma grandiflora G.Don Theobroma macrantha Bernoulli Theobroma speciosa Willd. ex Mart.