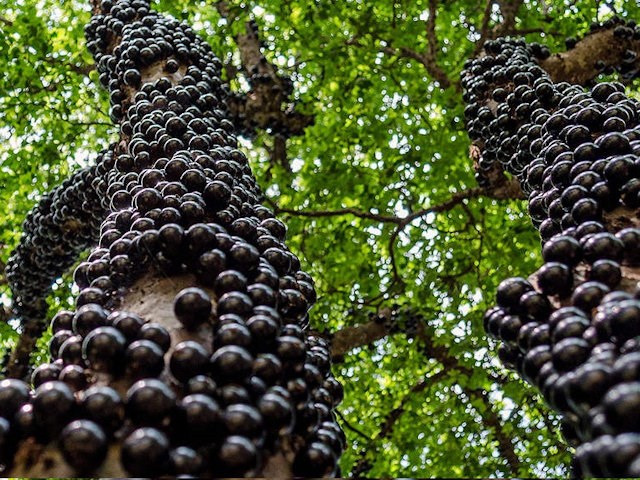 Description:
The jaboticaba is a slow-growing cauliflora tree that prefers moist, weakly acidic soils. It adapts widely, however, and grows even satisfactorily on alkaline soils beach sand type, as long as it is rooted and irrigated.
It has salmon-colored leaves when young, pulling green later.
Its white flowers grow directly on the trunk. In nature, the species usually only flowers and fruits once or twice a year, but when it is continuously irrigated, it flowers frequently and fresh fruits can be produced throughout the year in the tropics.
The fruit is black-purple, 3-4 cm in diameter, and contains one to four large seeds. It has a white pulp and sweet or pink and gelatinous.

Use :
Common on the Brazilian market stalls, the jaboticaba is widely consumed raw. The fresh fruit begins to ferment 3 or 4 days after picking, so it is often used to prepare jams, pies, juices, strong wines, and liqueurs.

Composition:
Several potentially antioxidant and anti-inflammatory components have been isolated from the fruit.

Cultural aspects:
The tree appeared as a charge in the coat of arms of Contagem, Minas Gerais, Brazil.
Synonyms:
Myrtus cauliflora Mart.
Eugenia cauliflora (Mart.) DC.
Myrciaria cauliflora (Mart.) O.Berg - This last name is still very common for naming the species, however it is less and less accepted in the scientific literature