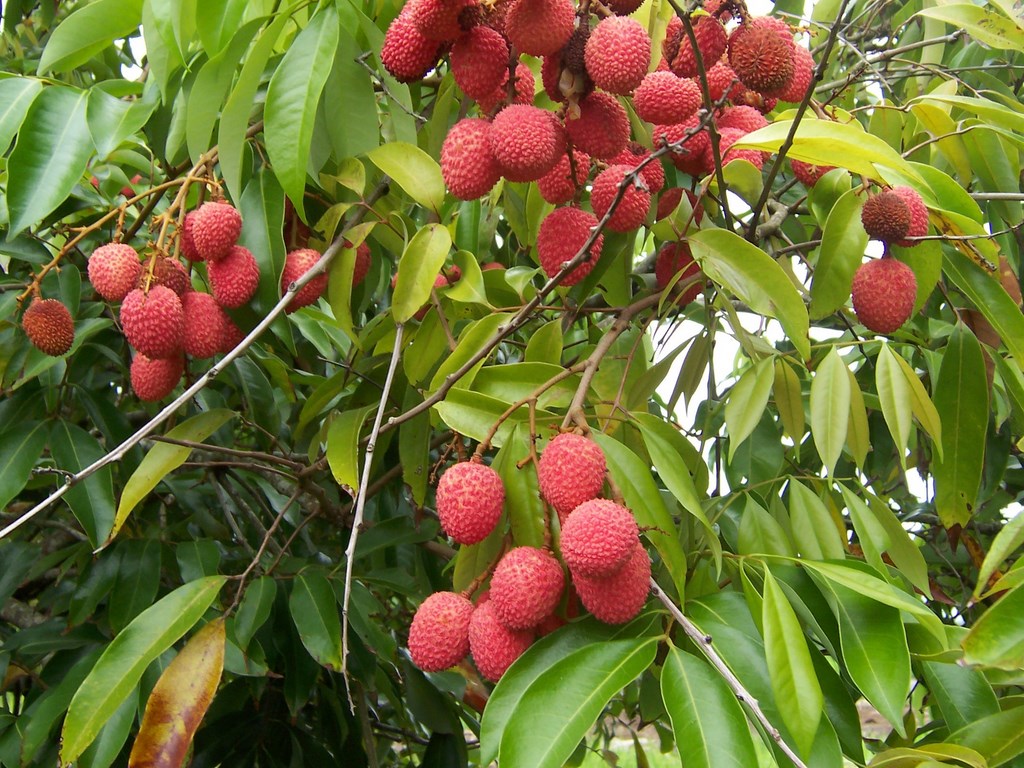 Scientific name: Litchi chinensis Sonn;
Common name (scientific popularization) recommended or typical in French: Litchi, or letchi;
Other vernacular names or vernacular names (everyday language) that may possibly designate other species: Chinese lychee, Chinese cherry, Chinese hazel, lechi, litchee, lychee, litchi culvert, culvert (culvert is a shade of deep bright red)
Description:
The Chinese Litchi (Litchi chinensis), or more simply Litchi (or Letchi), is a fruit tree of the family Sapindaceae, which produces the edible fruit of the same name. This tropical tree is the only species of the genus Litchi. The name comes from Cantonese 荔枝. The tree is native to China where its cultivation is attested for more than 2,100 years. The portion consumed is the juicy aril that surrounds a single seed. The lychee resembles, by its structure, other tropical fruits of the same family: longan (or longani), rambutan (or "lychee hairy"), the quenette.

description:
The species has been introduced for fruit production in other tropical regions, in India, Vietnam, Madagascar, Thailand, Hawaii, Reunion (where the fruit is called letchi and the pied de letchi tree) in Mauritius, the Comoros, New Caledonia (renowned for Houaïlou's Letchis), Brazil in the State of São Paulo, etc.
The litchier is a medium-sized tree that can reach a height of 15 to 20 m14. The general silhouette is quite round, the foliage is dense and well covering.
It has alternate compound leaves 15 to 25 cm long. They are paripinnate, which means that they are composed of an even number of leaflets and that there are none in the terminal position. The leaflets, two to eight per leaf, each measure 5 to 10 cm in length. The top of the limb is a rather dark green and glazed appearance, the bottom is rather greyish and matte appearance. Before reaching this color development, the young leaves have a brilliant coppery red hue then soft green.
The flowers are small (4 to 5 mm in diameter each) and pinkish white to greenish-white in color. They are formed of a small ovarian disc and nectarifère with two carpels surmounted by a crown of stamens erect, generally six in number. Fertilization is provided by insects, mainly bees. The flowers are grouped into upright panicles up to 30 cm long.
The trunk is often branched at low height of the ground. The bark is smooth but the trunk surface is very irregular, ribbed or fluted.
The fruit: double litchis and lychee
The fruit is a small sphere 3 to 4 cm in diameter, sometimes a little heart-shaped, surrounded by a rather tough shell scaly appearance that takes a pink to red when ripe.
The fruits are carried by hanging bunches. Each cluster has a few units to a few dozen lychees.

Uses:
Fruits:
The fruits are consumables raw, picked at maturity.
Like cherries, the production of lychees, sometimes called "Chinese cherries", is seasonal and occurs in early summer. In its country of origin and in the rest of the northern hemisphere, the lychee season corresponds to the months of June and July, whereas in the countries of the southern hemisphere where their culture was introduced, harvests are held in December and January and the fruit is thus associated with Christmas and New Year.
Juicy, sweet, sweet and pleasantly scented, easy to shell and tasted in one or two bites, lychees are fruits that are generally appreciated by a large number of people.
After picking the lychees retain their beautiful red appearance quite a short time. Exposed to heat and light, they brown in a few hours which makes them less attractive although still very tasty. To prolong the holding of the fruits, they are gathered in clusters with branches and foliage and protected from the exposure to the sun. In Reunion, the branches are thus stuffed into big bales in coarse weaving of vacoa and the merchants do not leave them to place them on their stalls that as and when the sale. Lychees keep well for several days if wrapped in paper and placed in the refrigerator.
For export, lychees are generally packed in boxes and kept cool, which is sufficient for a good conservation of a few days in the context of fast shipments. The best fruits are those that are picked at maturity. The low-end fruits that are found in mass on the European markets are often picked too green, they are more able to travel but they maintain a very strong acidity.
The prolongation of the shelf life and coloring is sometimes obtained by fumigation with sulfur dioxide followed by soaking in an acid bath, but this currently legal treatment is subject to serious reservations for public health. Lychees are good for freezing. We can freeze either the whole fruit or only the pulp. Lychees are also abundant in preserved canned syrup. If lychees are first appreciated fresh and natural, they can be cooked in many ways: raw in fruit salads, baked in pastry or with meat. They are at the base of various preparations: sorbets, jams, fruit juice, ... Many brands also offer cans of iced tea flavored lychee juice and even some brewers, including Reunion Island, have developed beers of Christmas perfumed with lychee. Lychee pulp can be used to make a rum made by simple maceration in rum. Lychee juice can be processed into lychee wine. Michał Boym in 1656 already pointed out this practice in China. Finally, the traditional Chinese method of preserving lychees is to dry them. They are then a popular delicacy popular and are for example used to sweeten tea. A study of Lancet revealed that consumption of lychee by a person who had not eaten the day before could be toxic and cause encephalopathy, because of the presence in the fruit of hypoglycin A and MCPG (methylenecyclopropyl glycine), molecules aggravating hypoglycemia. Honey: Lychees are very honey-loving trees. Fertilization of flowers is provided by bees. The installation of apiaries close to lychee orchards allows both to improve the fruit production and to harvest a lychee honey, with a sweet and delicately scented flavor. Wood: The lychee wood, despite its often irregular shapes and hardness that makes it difficult to work, is sought by cabinetmakers and turners for the fineness of its grain and its warm color. It is used to make furniture and other objects. Medicinal uses: Seeds that contain saponosides and are rich in cyclopropane fatty acids are also recognized in the Chinese pharmacopoeia. Semen Litchi "Li Zhi He" is recommended for its astringent, analgesic, stomachic (gastric pain, intestinal transit) and tonic properties.