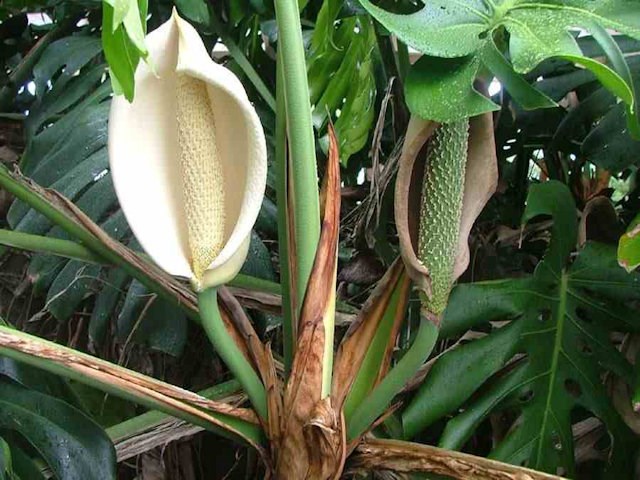 - Common name: Delicious Monstera, Pineapple of the poor.
- Other name: Delicious fruit. Philodendron. Siguine snake.
- Scientific name: Monstera deliciosa Liebm.
- Synonym: Monstera borsigiana K.Koch. - Monstera lennea K.Koch. - Monstera tacanaensis Matuda. - Philodendron anatomicum Kunth.
- Order: Alismatales.
- Family: Araceae - Araceae.
Origin, distribution Monstera deliciosa Liebm.
Monstera deliciosa Liebm., Is native to the rainforests, in the lowlands and middle mountains, in the extreme south of Mexico and in Guatemala. The species is widely cultivated as an ornamental plant or for its edible fruits in the tropics and subtropics.
​
Description:
It is a robust, large hemiepithytic plant, producing abundantly aerial roots in the axils of brownish-brown leaves. In nature it can reach up to 20 m long, but in apartment it measures between 2 and 3 m (even if its leaves carried by long petioles make it much more imposing). The first leaves are small and full, then grow and dissolve gradually during growth. The leaves are large (up to 1 m long), heart-shaped and pinnate. The older the plant, the more the leaves are covered with large perforations which earned the name of "plant-gruyère" ("swiss cheese plant" in English).
Inflorescence: The flowering produces spadices, inflorescences typical of the family Araceae, constituted as in the arums of a spathe surrounding a central spike. The inflorescences are adorned with a cream-white spathe uniform, velvety appearance, covering, like a hood, a yellowish white spike 10 to 15 cm high and about 3 cm in diameter.
Infructescence: when the spathe fades, it takes on a gray-brown color, a dirty and dirty appearance, then falls. There remains only the spike erect 20 to 25 cm about 5 cm in diameter, green in color, consisting of juxtaposed items each covered with a polygonal scale. The fruits develop even in the absence of fertilization, in a parthenocarpic way. When immature, fruits are toxic and irritating due to a strong presence of oxalic acid. When ripe, the fruits become tasty and edible: they are known as "cerimans" or "delicious fruits". By removing the outer scales which are easily detached, a juicy and sweet flesh appears around a central axis, the taste of which is reminiscent of pineapple, banana or pear. The fruit is fragile, corrupts quickly. It contains between each article the remains of the nets of the stamens which are large and flattened in the form of small black parchment scales which oblige to a careful tasting. You can also make juices or jams.

Culture :
Monstera deliciosa is a fast-growing, vigorous plant. As a result, it is widely used as an ornamental plant in the tropics and subtropics. Its ease of cultivation also makes it a very widespread plant in apartment in temperate regions. On the other hand, cerimans are generally not marketed. Although consumed in tropical countries, it takes a long time (up to a year) for fruits to reach maturity. Before it is unconscious because very sour, even toxic in high doses. As a result, Monstera deliciosa has never been grown industrially for its fruit.