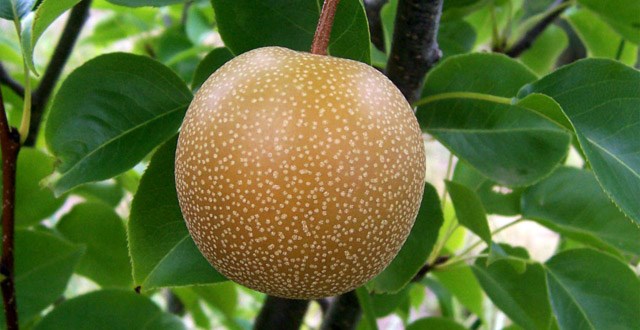 Nashi (Pyrus pyrifolia), sometimes written nachi, is a tree species native to the Far East1 of the genus Pyrus (the pear trees), of the Rosaceae family.

Etymology:
Nashi (梨) is a Japanese word that can be translated as "pear". The common pear (Pyrus communis) is called Yōnashi (洋梨), the "pear of overseas".
Nashi is also known as "pear apple", "Asian pear", "Japanese pear", "pear crystal" or "pear of sands".
Description:
The Asian pear tree is a tree of medium development, the wild form can however reach up to 15 m of height. It is deciduous and shows oblong, dark green, petiolate leaves with a lighter back. In April the white flowers, slightly pinkish hatch: a flower of simple form with 5 petals, typical of Rosaceae. They attract and feed many pollinating insects. The wild fruits are small and brown, spotted with white. They are hard and granular. But Pyrus pyrifolia var. Culta, includes varieties grown with larger and edible fruits. It comes in many cultivars, often selected by crossing with varieties of Pyrus communis. The foliage takes a beautiful autumnal color before falling. With its important flowering and autumn colors, Pyrus pyrifolia is also a beautiful ornamental tree.
​
Use :
The nashi is a big round fruit more reminiscent of the apple than the pear, hence its name pear-apple, although no crossing has been made with the genus Malus, the apple trees. White flesh fruit that has the shape of an apple and the skin of a pear. Its taste is neither apple nor pear but a kind of subtle crunchy, sweet and juicy mixture.
It is eaten, raw or cooked. However, a high consumption of raw fruits can cause intestinal disorders.
Low caloric and rich in vitamin C and magnesium, the nashi is eaten rid of its skin which is thick. Raw in salad or chew, cooked in compote, in coulis or in accompaniment of a sweet and salty dish, with honey or ginger, the nashi gives a touch of originality and goes well with foie gras in particular!
Nashi also makes excellent fruit preserves, which can be used later to make pies, for example.