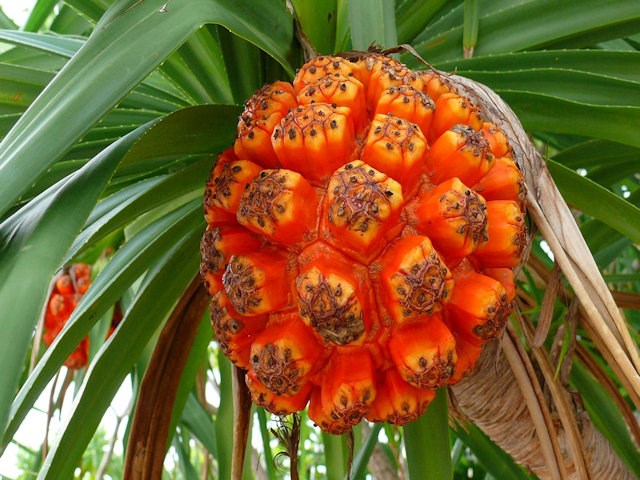 Pandanus amaryllifolius
Pandanus is a genus of tropical plants belonging to the family Pandanaceae. This genus includes over 600 species distributed around the tropical belt, from Africa to Oceania in various habitats (underwater dry).
With the coconut tree, the many species of Pandanus, also called Baquois, are probably the most useful "trees" of the Pacific and the Indian Ocean. Their strange appearance has always struck European travelers. Like any monocotyledonous plant, they are not real trees and their stem is not a real trunk. This stem or false trunk, of a substantially equal diameter from the top to the base, is covered with a smooth and marbled bark. Many adventitious roots, similar to the twigs, but terminated by a green germ, detach themselves from them at variable points and move towards the ground, which they often reach only after a long journey; together they form a pyramidal bundle that seems to support the stem.
Although Pandanus are widespread in all the islands of the tropical Pacific, the lower islands of Polynesia and Micronesia are their favorite terrain: Fara in Polynesian languages ​​covers the most deprived atolls. Some species are cultivated, propagated easily by means of the buds that form spontaneously in the axils of the lower leaves; the fruit can also float and spread without the help of humans.
The uses of the leaf and the fruit concern in many regions, basketry objects, clothing and necklaces, roofing) and food or cosmetic uses.
Basketry: Australian Aboriginal women in non-desert areas carry out elaborate weaving works from pandanus fibers, especially holsters and bags (dilly bags, dilly for pandanus and bag in Yagara for naked hunter-collectors Some "tight" braided bags are even waterproof: they can thus be used to bring back water, bush honey, etc. In French Polynesia, the pandanus leaves are braided to form rolls of pae ' which will be used to support the belts of Tahitian dance costumes.
In Tonga and Fiji, ta'ovala can be made from pandanus leaves, cut into more or less wide bands depending on the use.
The adornments: The perfumed drupes (fruit elements) are used to make necklaces or crowns during parties.
Food Uses: The fruits, called galipes, were easily preserved and were eaten cooked in case of scarcity. If today, no one consumes pandanus in French Polynesia, however, the fruit is still eaten in Kiribati, the Marshall Islands and the Cook Islands where the number of species and varieties is much greater. The vacoas find the same use in Reunion. The leaves of Pandanus amaryllifolius are also used in Southeast Asia to flavor sweet preparations such as rice, coconut or other preparations such as pandan pancakes known throughout Indonesia. It is also used as a food additive called pandan essence.
Cosmetic Uses: Nine species in French Polynesia have more used leaves (roofing, basketry) than fruits. Indonesian peasants also use pandanus as foot soap [ref. necessary]. Men perfume their sex with wilted and boiled pandanus. The Mahoran women (from Mayotte) use the very fragrant flower, called mgu, as an intimate invitation to love. Either as a component of an ointment for the body, or alone to perfume the sheets of the seductress. However, if the male remains restive to the act of love, the woman does not hesitate to rub the pandanus on all the walls and the front of the bamboo hut.