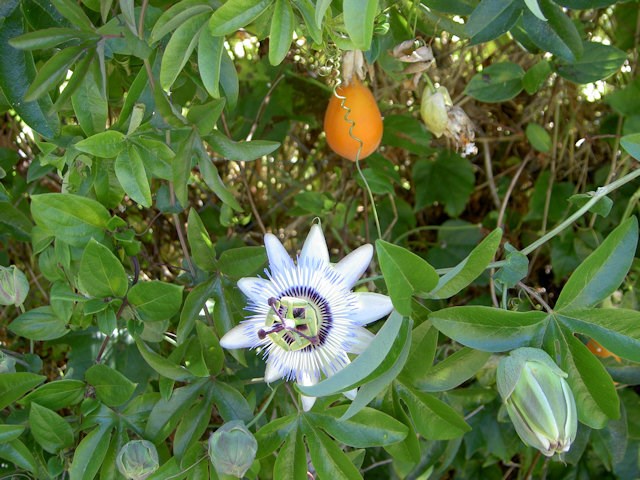 Passiflora is a genus of plants, the passiflora, of more than 530 species of the family Passifloraceae. They are spectacular flowering climbers, but their abundance is guaranteed only in areas with mild climate.
They derive their name from the fact that the Jesuit missionaries of South America used the flower of this liana to represent the Passion of Christ to the natives: his pistil, the drawings of his corolla and various floral pieces would look like crown of thorns, with the hammer and nails of the Crucifixion.
The aerial parts of the officinal passionflower (Passiflora incarnata) are known in herbal medicine for their anxiolytic and sedative action.
Grenadilla (Passiflora edulis) produces an edible fruit with a tangy flavor, called passion fruit, which is used in sherbet, juice or coulis.
The blue passionflower (Passiflora caerulea) is the ornamental passionflower most cultivated in metropolitan France.
The diversity of leaf forms in the passiflora is thought to be due to butterflies. Heliconius Lepidoptera tend to choose certain forms of leaves for laying. The pressure of the caterpillars devouring these leaves causes the plant to "invent" other forms.
​
History:
Passionflower button
Passiflora were unknown to Europeans before the discovery of America by the Spaniards.
The first literary mention of a passionflower is found in the description of the city of Cali in Colombia given by Pedro Cieza de Leon in 1553 where he mentions the fruits of granadilla (small pomegranates) in the orchards around the city3.
Some twenty years later, a more elaborate description of the passiflora is found in the work of the Spanish botanist Nicolas Monardes published in 1569-1574. He was probably also the first to use the religious term flos passionis "flower of passion" to designate it because the flower was according to him, "precisely made to represent the Passion of Christ". Monardes born in Seville in 1493, never went to America, but thanks to his informants and the samples of plants brought back from the West Indies, he was able to give in his work Historia Medicinal ... detailed and relatively objective descriptions. passionflower, tobacco and coca.
The very term Passiflora was created by Federico Cesi, the founder of the Accademia dei Lincei, in a publication dated 1628 (but released in 1651). Indeed, the characteristics of the plant evoke the Passion of Christ:
the 72 filaments suggest the 72 thorns of the Holy Crown.
the thirty or so round spots on the inside of the flower are associated with the 30 silver coins that Judas received for the price of betrayal.
the 5 stamens evoke the 5 wounds of Christ.
the 3 points of the pistil recall the 3 nails of the Cross.
the pointed leaves suggest the spear having pierced the side of Jesus.
Before Linnaeus, only a few botanists (such as Francisco Hernandez, Leonard Pluckenet, Charles Plumier and Tournefort) described various species of passiflora. The first monograph of the genus Passiflora is the work of Johan Gustav Hallman, a pupil of Linnaeus. In a remarkably modern presentation, it describes 22 species, gives their synonyms, the use that the natives make of them, as well as a classification and their distribution.
In 1753, the conventional starting point of modern taxonomy, Linnaeus in Species Plantarum, creates the genus Passiflora and gives a description of 24 species, resuming the work of Hallman, then increased to 35 by Lamarck in 1789 and 43 by Cavanilles (1790). The next step was the creation of the Passifloraceae family and the description of 15 additional species, by Antoine-Laurent de Jussieu (1805).
In the nineteenth and twentieth century, the greatest contributors to the progress of the knowledge of Passiflora were Candolle (1828), Roemer (1846) and Maxwell Tyndell Masters (1871), Hermann AT Harms (1893) and Ellsworth P. Killip (1938) .
The number of accepted species is currently around 525, including at least 175 species that can not be identified with a key. The need for a revision of the genre is therefore felt.

Division :
Passivores are mainly distributed in the warm temperate and tropical regions of the New World. Although they are mostly present on the American continent, there are also species in Asia, Australia and tropical Africa.