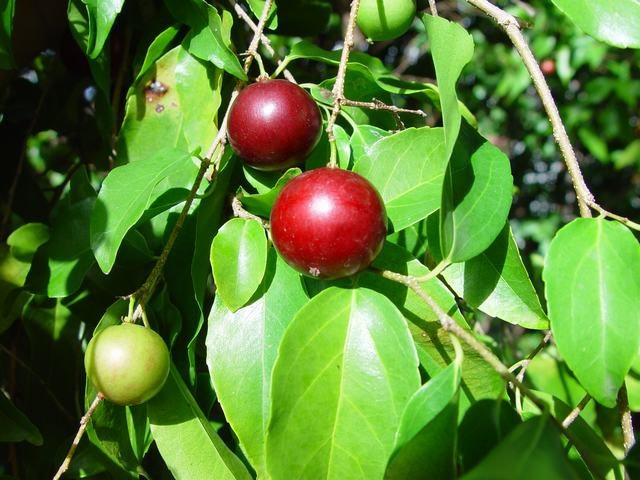 Flacourtia jangomas
Flacourtia jangomas, plum of Indian coffee, is a tree of the rain forest of low and mountain in the family of salicaceae or willows. It is widely cultivated in Southeast Asia and East Asia and has escaped cultivation in many places. Its wild origin is unknown but is supposed to be tropical Asia, most perhaps India. This tree is very common in southern India and has immense culinary and medical significance, especially in Kerala where it is commonly called lubica or lovlolika. The fruits are eaten raw and cooked like a jam, and the bark is sometimes used in medicine. It is sometimes harvested for its wood. The plant is considered one of the main host plants of the Queensland fly
Description
Flacourtia jangomas is a small shrub or deciduous tree that reaches a height of 6 to 10 m. The trunk and branches are usually thornless in old trees, but densely assailed by simple or branched woody spines. The bark is light brown to coppery red with a puffy texture and the leaves are light green and narrow oval shaped. It produces small fragrant white to whitish-green flowers. The relatively juicy fruits are rounded pink to dark red and are about an inch wide
uses
Food
The fruits of Flacourtia jangomas are widely eaten in South Asia, both raw and cooked eat well ripe and after kneading it between the fingers, reducing or eliminating its natural astringency. Its flavor is then tart and sweet .. The fruits are pickled, dried in salt or cooked in Indian curries. They can also be mixed in juices or made into jams and marmalades extremely popular in southern India. Commercially produced coffee plum jams and marinades are exported around the world by various companies, mainly from Kerala.
Medicine
In South Asian folk medicine, fruits and Indian plum leaves are used against diarrhea. The dried leaves would be effective against bronchitis and the roots are said to suppress toothaches. The bark of Flacourtia jangomas contains various antifungal and antibacterial constituents, making it an important ingredient for some Ayurvedic medicines. Ground bark paste is also used to treat many common diseases in the tribal colonies of Western Ghat. All parts of the plant have properties against coughs, flu and asthma seen against certain cancers.
Wood is sometimes harvested for timber in the Indian states of Tamil Nadu, Kerala and Karnataka. It is often used as a cheaper alternative to teak and other expensive woods.