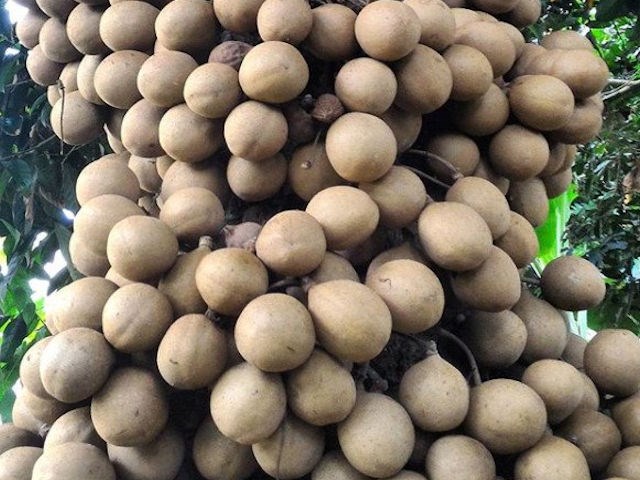 Stelechocarpus burahol, known as burahol, kepel, kepel fruit, keppel fruit, or apple kepel, is an evergreen moist forest plant in Southeast Asia, known to produce an edible fruit.
​
Description and ethnobotany:
Plant morphology
Growth form: Medium-sized tree up to 25 m tall. Conical crown, with symmetrical lateral branching. Mature bark dark brown, scaly, peeling in places.
Foliage: Leaves leathery and strongly veined; the young shoots emerge in dark red, becoming pinkish, light green then dark green. Each rinsing episode lasts about 2 months, usually occurring before flowering and after fruit drop.
Flowers: Produced in clusters of 8-16, emergent greenish and age to whitish. The species is monoecious (male and female flowers separated on the same plant) and exhibits a cauliflower. Male flowers (1 cm in diameter) produced on the upper trunk and older branches. Female flowers (3 cm in diameter) found only on the lower trunk, visited by bees, ants and sometimes butterflies. The flowering season in Java is usually from September to October, with occasional off-season flowering.
Fruits: The pollinated female flowers give rise to fruit the size of a tennis ball (5-6 cm in diameter), ripen from green to brown in 6 months (usually from March to April), with a slightly warty texture . The fruits are ripe, whether the color is yellow or light brown (rather than green) under striped skin, containing edible pulp, juicy orange with spicy flavor of mango (described as an acquired taste). Eat by bats and rodents in the wild, and should be protected by bagging 1-2 months before harvest. Harvested fruits can be stored for 2 to 3 weeks at room temperature. The adult tree yields 1,000 to 1,500 fruits a year, with variations due to irregular rainfall. Seeds ellipsoid, relatively large (3cm long), 4-6 per fruit.

Culture :
Prefers deep, moist soils. It is preferable that the seeds are propagated by seed, because cuttings and layers of air would be unsuccessful. Ripe fruit seeds are scarified and sown immediately. Germination may take several months, seedlings grow very slowly and may not show significant growth, especially in the first 10 months. The juvenile phase lasts from 6 to 9 years.
Etymology:
A genus epithet "Stelechocarpus" derived from the Greek terms "stelecho" (trunk, branch, stem) and "karpos" (fruit), describing the cauliflorus nature of this species, and how the fruits are directly buried on the main woody parts of the tree. The common name "Kepel" means "fist closed" in Malay, alluding to fruits the size of a fist.
Ethnobotanical Uses:

Use:
Cultivated in Indonesia for fruits, which are eaten fresh at maturity. Pulp popularly consumed by Indonesians who believe that its natural deodorant effects would lend a scent of lavender to body secretions (urine, perspiration), breath and smell.
Use of fruits traditionally reserved for royalty and aristocracy. The flowers are also eaten for the same reason. Medicinal: Fruit pulp used as a diuretic, to prevent inflammation of the kidneys, and cosmetically in the "jamu awet ayu" (traditional Malaysian medicinal herbs for "lasting beauty").
Also causes temporary infertility in women, and used by royal ladies and consorts as a contraceptive. Products: Wood used to make household items. The trunk is used in home building and is expected to last more than 50 years.