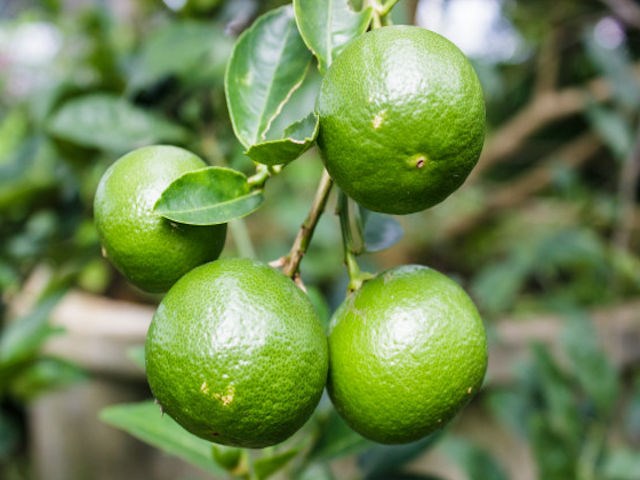 Lemon (or lemon) is a citrus, fruit of the lemon tree, whose juice has a pH of 2.5. The lemon tree (Citrus limon) is a shrub 5 to 10 meters high, evergreen, family Rutaceae.
This ripe fruit has a bark that ranges from tender green to bright yellow under the action of the cold. Maturity is late autumn and early winter in the northern hemisphere. Its flesh is juicy, acidic and rich in vitamin C, which is worth it - with its easy conservation - to have been spread all over the planet by browsers who use it to prevent scurvy. From the bark is extracted an essential oil which contains among others limonene and citral substances.
Sweet lemons are fruits of juice cultivars with little or no acid nevertheless classified Citrus limon (L.) Burm. f. (Tanaka classification).

History:
Phanias d'Eresa seems to make us suspect that lemon can derive its name from the word cedron.
The origin of the yellow lemon has long remained unknown, notably because of its polymorphism and inter-varietal diversity. The researchers located his wild ancestor in the region of Assam, the Indo-Burmese region or China2. Phylogenetic studies in 2016 show that he was born in the Mediterranean and comes from a hybrid between bigarade (or bitter orange) and citron around the 5th millennium BC. J. C.3.
The lemon tree was originally an ornamental plant in recreational gardens in the Middle Ages, including Islamic gardens4. The lemon is gradually introduced into the medieval diet where it is used as an acid fund intended essentially for the development of raw vegetables or seasoning any food in the same way as verjuice, vinegar or orange juice. However, it is likely that it has been used as a technique for preserving meat with acid since ancient times.

Description:
In terms of external morphology, lemon is a particular fleshy fruit, called hesperide, from the development of a multicarpelled ovary. Oval, it is endowed in many varieties, a mucron or a nipple surrounded by an areola, circular depression more or less deep and wide at the stylistic end. The growth of the peduncle during fructification gives rise to the columella, the central axis more or less fibrous of the fruit which has as many libero-ligneous bundles as there are carpels to which they lead. The persistent calyx at the peduncular region, has 5 green sepals, welded in the form of cut.
At the anatomical level, the pericarp of this citrus, also called bark, is composed of two superimposed layers: the outer layer, also called "flavedo" (rich in flavonoids, yellow pigments, Latin flaveo, "yellow") is formed of the epicarp and outer mesocarp, and corresponds to the zest; the white and spongy inner layer, also called "albedo" (Latin albedo, "whiteness") or "zist" (possibly Greek skizein, "split") , is the internal mesocarp which is the most important source pectines and carbohydrates. Depending on the maturity of the lemon, the color of the flavedo varies from green to bright yellow. It contains many essential oil glands with a very distinctive aroma. These glands, rich in terpenes, constitute a real chemical barrier against insects and microorganisms and help protect the fruit from external attacks. The bark is made up of the epicarp and the mesocarp.
The thin endocarp limits the fleshy pulp. It emits inwards bags or vesicles to juice (these bags are endocarpic hairs, fusiform cells consisting of a large vacuole where accumulate water, carbohydrates and citric acid) contained in 8 to 12 quarters (or segments) well differentiated separated by a septum, thin membrane formed from the internal epidermis of the carpels (this carpellary wall containing cellulose, hemicellulose and pectins delimits the segments corresponding to the carpal boxes). Seed-like seeds are formed in the carpal boxes from two rows of eggs placed on the sides of the angle formed by the septa at their confluence with the columella.
Finally, a singular phenomenon can sometimes be manifested on certain individuals: navelization (of navel English, this variety being characterized by the frequent presence of a second small fruit which is reminiscent of a navel) which is analogous to superficial the man. The flower has several floors of carpels, the second stage forming above and inside the first and giving birth to a small fruit more or less aborted. This second fruit can form entirely inside the main fruit or, on the contrary, be pushed outward giving rise to a more or less accentuated protuberance.

Protected geographical indications:
The colors, aromas, flavors, degree of acidity or sugar, the richness in essential oil vary according to the varieties, the terroirs, the climates, the maturity, the age of the lemon tree and the type of rootstocks, forming a pallet of unsuspected tastes. The diversity of lemons is not reflected in the catalog of registered varieties. From the Mediterranean climate to the tropics, there are many local cultivars resulting from seed reproduction. Use: For food: It has multiple uses in cooking: Fresh juice is used in seasonings on fish; It replaces vinegar in salads; It is often used in confit form in Moroccan tajines; Added with water and sugar, he composes lemonade, a refreshing drink; It is also an essential ingredient of lemonade, limoncello and cherbet drink, which is very popular in Algeria; It is used in pastry, especially in the recipe for lemon pie; The marmalade can be made with lemons. At room temperature, it is kept for ten days, but once cut (or cooked), it loses its vitamins, so it must be consumed quickly. Lemon can be used to prevent the oxidation of certain fruits and vegetables that turn black when in contact with air. The fruit flesh (apple, pear, avocado) can be rubbed with one half of lemon to save the vitamins or sprinkle grated raw vegetables like celery root with lemon juice. The addition of a few drops of lemon or vinegar makes the broken dough softer and less elastic, because the acid breaks down the gluten (protein of the flour). Alcohol can be made from lemon, such as lemon liquor. For Health: Advertisements regarding the benefits of lemon may contain false, ambiguous or misleading health claims. Thus, lemon is lent all kinds of virtues: strong in vitamin C, it would erase any fatigue, promote digestion, make white teeth, would be diuretic. In addition to its anti-infective, antiseptic and healing properties, it reduces cellulite (fat-burning food), slows down aging and even helps protect against cancer. Most of these claims are not scientifically proven. However, its richness in vitamin C promotes healing. The citric acid of the juice is antiseptic, hence the gargles with juice cut water in case of sore throat and the addition of a few drops of lemon juice in seafood eaten raw. The lemon rubbed on the teeth, instead of whitening them (eliminating the stains of tea, tobacco), attacks the enamel on which the repeated acidity can lead to demineralization of the teeth and create micropores sufficient to let the bacteria enter. origin of caries. Finally, this fruit remains interesting for health because of its richness in vitamin C, calcium, phosphorus and potassium whose assimilation is favored by citric acid. Lemon can even have significant adverse effects. Lemon, like all citrus fruit, is rich in furanocoumarines (psoralen, bergaptene, especially present in the pulp, these components are therefore more concentrated in fresh fruit juice than in pasteurized fruit juice) which can lead to photosensitization. High citrus consumption increases the risk of melanoma by 30%. Thus, the frequent consumption of fresh fruit juice would slow the progression of certain cancers but would favor that of the skin for people who do not protect themselves from the sun.
In other applications:
Lemon can also be used as a descaler in a dishwasher, also scenting the dishwasher. Lemon juice: can be useful for cleaning aluminum objects, and goes into the composition of the mixture to clean copper utensils, and fight against rust. It has the effect of naturally whitening teeth. Mixed with water makes it a drink that cuts thirst and is also refreshing.