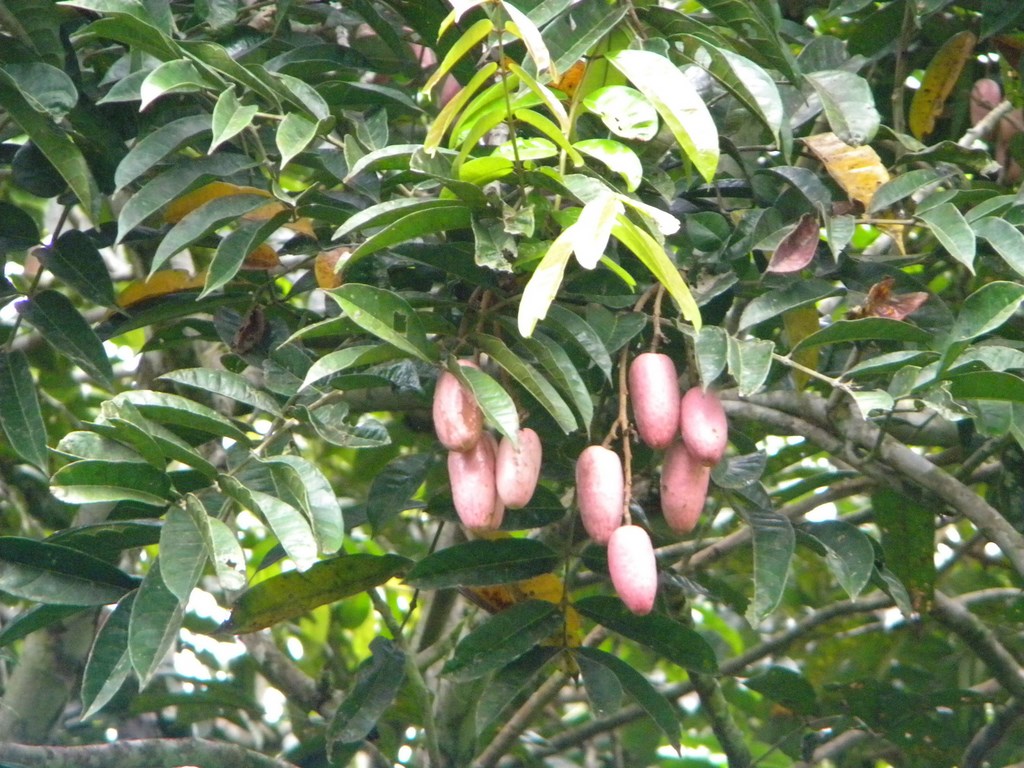 Dacryodes edulis (G. Don) Lam.
Ann. Jard. Bot. Buitenz. 42: 202 (1932)
synonyms
Canarium edule Hook f. Canarium mansfeldianum Engl. Canarium mubafo Ficalho. Canarium saphu Engl. Pachylobus edulis G Don. Pachylobus saphu (Engl.) Eng. Soreindeia deliciosa A.Chev. ex.Hutch. & Dalz.
Common names
Safoutier: (usual) plum tree from Africa
Local names
Bakoko: sas. Bakwéri: sao. Bamileke: shoue, tso. Bamoun: wom. Bassa: sah. Bombo: mbil. Boulou: asa, assas. Douala: sao. Dschang: ekiep. Ewondo: assa. Fang: odou. Ibo: oube. Pygmy Baka: sèné
Origin, geographical distribution and ecology
Species native to the dense forests of southern Nigeria, Gabon and Cameroon, it has been widely distributed in tropical Africa both in plantations and around homes, in town and in the countryside. In the natural state, the species is not gregarious.
Description
Tree up to 15 m tall and 80 cm in diameter; hemispherical crown, deep, dense foliage; short bole; cylindrical to slightly conical base; gray bark exfoliating in irregularly shaped thick slices, red to brownish-pink slice, exuding a whitish resin with turpentine odor.
Leaves alternate grouped in clusters at the ends of the branches; imparipinnate compounds; 1-2 pairs of pseudo-stipules often deciduous on the petiole; 5-8 pairs of leaflets; oblong to elliptic laminae, up to 20 x 7 cm, acuminate tops, asymmetrical bases, pubescent or glabrous, coriaceous or papery; young red leaves.
Unisexual, female or bisexual male and hermaphrodite plants. Axillary inflorescences in panicles of biparous cymes on the leafy twigs.
Reddish-brown, unisexual or hermaphrodite flowers, trimers; 3 free sepals; 3 free petals; 6 stamens, 6 staminodes in female flowers; disc fleshy and annular pistil to bilocular ovary, rudimentary ovary pistillode in male flowers.
Fruits: oblong to ellipsoid drupes, or subglobose, pink, then dark blue when ripe, up to 9 x 4 cm; pulp surrounding a nucleus with smooth integument, thin and membranous.
Single seed with 2 palmatised cotyledons; 5 segments fleshy by cotyledon.
Variable phenology according to local climate and soil parameters. In general, flowering during the dry season (February - March). Beginning of fruit ripening in May - July under the climatic conditions of Cameroon.
Variability and conservation of the resource
This plant is grown throughout the southern part of Cameroon. Because of its growing food and commercial interest, some planters have embarked on pure safour culture. Studies show that there are significant variations between accessions and between trees of the same accession. No clear varietal boundaries have so far been established within this species. However, variations are observed in terms of vegetative traits, reproductive organs and the phenological behavior of trees. Tree habit, leaf size and color; the shape, color, size and taste of the fruits vary from one tree to another. The same is true of the flowering and fruiting period, some individuals being early and others late. The World Agroforestry Center (ICRAF) and IRAD have launched a program to improve this species based on vegetative collection and multiplication (including layering), individuals or accessions that are distinguished by organoleptic or phenological characteristics. exceptional.
According to Kengue (2002), the number of chromosomes is 2n = 40-42. In Cameroon, the pressure of selection by farmers is quite strong in some parts of the country. Unproductive male feet and trees producing sour fruit are systematically eliminated. This empirical selection method, despite the very interesting results it has achieved in terms of increased production, contributes to shrinking the genetic basis of the safoutier. To mitigate this, IRAD undertook surveys that led to the establishment of two collections in the Nkolbisson and Barombi-Kang research stations, covering an area of ​​5 hectares and a total of 140 hectares. accessions collected in the different agroecological zones of Cameroon.
Agronomy
Until very recently, the cultivation of the safoutier was based solely on seed multiplication. Today, the planting of wild vines at the foot of trees and the planting of direct sowing seeds have gradually given way to the technique of producing seedlings in the nursery before going to the fields.
A dioecious species with essentially allogamous reproduction, seed multiplication poses serious problems for the reproduction of traits that are for the most part maternal traits. Thus, more and more.
​
uses
Dacryodes edulis is one of the most cultivated traditional fruit species in Central Africa and the Gulf of Guinea. Today's interest in this species is based on the nutritional, commercial and calorific value of its fruits rich in fatty acids, amino acids, mineral salts and vitamins. The parts of the plant used are: fruits, fat, flowers, bark and leaves.
The fruit of Dacryodes edulis is consumed grilled or cooked in hot water because, under the effect of heat or fire, the pulp that covers the core softens. This fruit belongs to the category of foods rich in protein and fat. These fats are likely to be used in the food industry including oil mills, pastry and biscuits. This plant is said to have medicinal value in traditional African pharmacopoeia and has potential for use in the cosmetics and pharmaceutical industry (Busson 1965, Mbofung et al., 2002, Avana et al. Fruits are also used as animal feed and the flowers are honey (Avana et al., 2002, Sonwa et al., 2002, Mapongmetsem, 1994).
The leaves in decoction are given to the women having given birth; the bark associated with other ingredients relieves abscesses among the Ewondo of Cameroon (Surville, 1995, cited by Mapongmetsem, 1994). The leaf ash used as a gargle on burns is a powerful healing factor in the Bamileke of Cameroon. The macerated bark, in decoction or in mouthwash, treats toothache, dysentery, anemia etc. (Maponmetsem, 1994). The resin of Dacryodes edulis is used in Nigeria in the treatment of dermatoses. The bark section of Dacryodes edulis exudes incense in very small quantities. The wood of Dacryodes edulis is used as firewood.