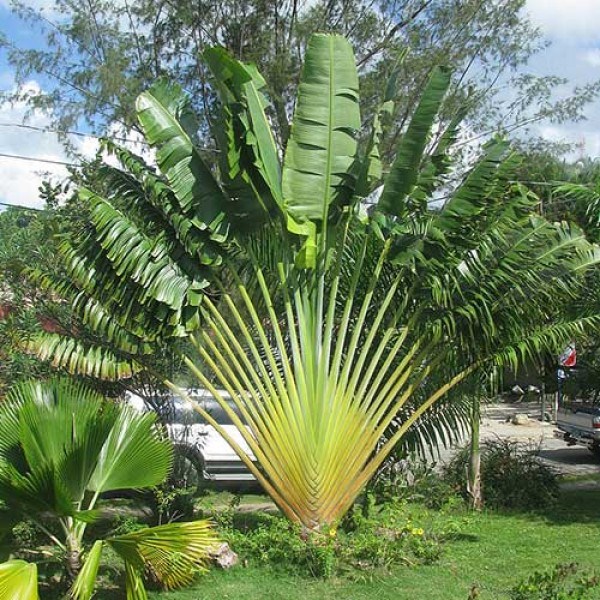 Traveler's tree - Ravenala madagascariensis
The traveler or ravenal tree (Ravenala madagascariensis) is a tropical plant of the family Strelitziaceae, native to Madagascar. Endemic species, it is also the only species of its kind in the island and elsewhere, because Ravenala is a monospecific genus.
Ravinala is the Malagasy name of the tree.
Its abundant sap is drinkable, and easy to extract with a machete. This fact has earned it its vernacular name in Western languages, because the tree allows to quench the traveler.

Description
Originally from Madagascar, the traveler's tree is part of the Strelitziaceae family. It is not a tree (in the botanical sense of the term), but a herbaceous plant with a lacunar stipe, which sometimes makes it look like a palm tree. Because of its shape and size, it can be seen from afar. Adult, the stipe is about ten meters high, bringing its total height to about 20 m. The botanist Philibert Commersson discovered it during his stay in Madagascar in 1779-1780.
Its large leaves are arranged in a fan, in the same plane. Their cup-shaped base holds rainwater in which many mosquitoes come to lay eggs. In Madagascar, these water reservoirs harbor very original species that are subservient to this micro habitat (amphibians, beetles and mosquitoes). The petiole is longer than the limb.
When flowering, it produces large white flowers, with 3 sepals, 3 petals and 6 stamens, in 15-20 cm spathes. In Madagascar, flowering begins in September. Pollination is provided by bats and lemurs.
The fruits are 6-celled, woody banana-like capsules containing many seeds surrounded by deep blue fibers that attract birds.

Name
An erroneous legend had it that its name "tree of the traveler" comes from the fact that the rainwater, which accumulates in the cavities cavities at the base of its leaves, would allow the traveler to drink. But this water, where dead leaves and insects macerate at tropical temperatures, is unfit for drinking. By the end of the nineteenth century, travelers and botanists on the ground considered this lexical motivation as whimsical and illuminated the true origin of the name.
"It is well known today that nothing justifies the reputation made in Ravenala and the legend that earned it its vulgar name. The truth is that it grows, not in deserts, but in moist soils or near streams. The water contained in the heart of the tree allows to quench the thirst. By piercing the heart of the tree, fresh water springs up which is particularly thirst-quenching. "

Ecology
Endemic species of Madagascar, the ravenale predominates on the eastern facade of the big island. It is one of the few endemic forest species to survive in secondary grasslands and exotic thickets, always on cool, wet soils. It grows very rapidly where primary forests have been deforested or burned.
The tree of the traveler is also present on the island of Reunion, in Mauritius, on the archipelago of Comoros (on the island of Mayotte in particular), in Guyana, in Guadeloupe, in Martinique, in New Caledonia, in French Polynesia and in the gardens of various tropical regions (Thailand, Cameroon, Paraguay, etc.) where it has been imported as an ornamental plant and sometimes becomes an invasive plant.
It is a major invasive plant in Mauritius where it forms very dense thickets in the mountains of the south of the island.

uses
On the east coast of Madagascar, its different parts are used as materials for the construction of traditional vegetable boxes, fresh and functional. The split petioles, called falafa, are used to make wall panels. The dried leaves, called raty, are used for the realization of the covers and finally of the trunk, one draws soft boards, called rapaka, with which one makes the floor.
It is an emblem of Madagascar, stylized on the planes of the national airline.
It provides an edible fat [How?], A bit like the butter tree of tropical countries.
A machete on the base of the trunk flows a particularly liquid sap whose taste is close to water. It is possible to recover a liter by machete after the rainy season, when the tree is waterlogged.
​
Culture
This non-frost-resistant species has long been introduced to tropical botanical gardens around the world, including the Pamplemousses Botanical Garden in Mauritius, the Eala Botanical Garden in the Democratic Republic of Congo, the National Tropical Botanical Garden. ) from Hawaii, to the Botanical Garden of South China in Guangzhou ...; in temperate climates, it is grown under glass or in an orangery.